People seem to have rather varied opinions on work gatherings. From what I’ve heard, they make a lot of people feel extremely uncomfortable; no one wants to cross the line from casual to unprofessional. While I hear that loud and clear, I’m a pretty big fan of work events. Although the planning of the events usually falls to me, which can be frustrating, I enjoy spending time with everyone from work in an atmosphere where no one has any control over me. There’s an immense satisfaction to be found in laying on a picnic table like a bum, with your boss feet away, not having to pretend that you have work to do.

As if this intro wasn’t a clear indicator, my annual lab picnic was held yesterday in Gunpowder Falls State Park’s Hammerman Beach. It was a nice venue, albeit overrun with WT. One of my coworkers was proactive enough to get there at 8:30 to hoard 6 picnic tables until the picnic started at 10. Of course, when Jenny and I arrived at 10 (after an hour and a half drive), there were only two people there. Punctuality isn’t a trait associated with scientists. 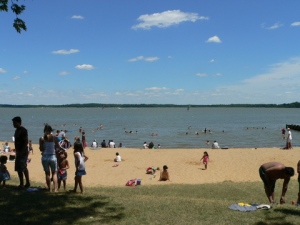 As with my daily life, all work related activities are almost exclusively a Chinese affair. At this point, I find it more humorous than anything. It can be especially fun to watch my coworkers trying to figure out traditionally American activities, such as starting and using a charcoal grill. I also enjoy the looks from passerby, wondering why there is a white giant hanging out with a gaggle of Asians.

On the whole, the food was very nice. In addition to burgers and bratwursts (I think my boss thought they were hot dogs), there were a bunch of Chinese meat and noodle dishes and 6 or 7 watermelons. I probably ate 2 or 3 of them myself. Someone also brought some of the best store brand cupcakes that I’ve ever had.

Despite the binge eating, I stayed active throughout the day by playing volleyball (which occasionally became heated), strolling around the park, and playing some frisbee. At one point, I ended up surrounded by 3 or 4 of my coworkers kids, aged 3-6, as some sort of ring leader. Luckily, growing up with 3 young sisters was great preparation for this type of thing. Kids remain one of the few things I have patience for (Traffic and most people are two things which I have no patience for).

On the drive back, we took a detour through Baltimore to check out my new neighborhood. It was the first time I’d ever driven there, since I’m usually taking trains and shuttles, and it got me pretty stoked for the move. I realized that I haven’t even scratched the surface of all the things to do in Baltimore.

Way different from where I live now, too.

When we finally got back to Rockville around 6, Jenny and I swung by Microcenter so I could ogle compute components, and stopped by Trader Joe’s. We picked up a Margherita pizza to split for dinner and a pound of bittersweet chocolate with almonds that looks like it’s straight out of Honeydukes. It’s the best for fighting the dementor blues!

Today was a nice Sunday. Slept in a bit, got a haircut, ate some Korean food (ja jung myun) and walked around DC. I bought a huge watermelon for the week as well. I’ve decided that beginning in July, I’m going to eat two watermelons a week for dessert. It’s in season and it’s my favorite fruit. Why not go to town? Enjoy the rest of your weekend and good luck on Monday!