There are two main steps in building a new computer. The first is to pick the component and the second is to put them together. If you are indecisive and particular like I am, the first step is unimaginably harder. If you’re a normal person, the second step is likely to prove more challenging. After all, you can have someone like me just tell you what to buy and receive it all in a nice little box at your door.

Of course, if you’ve done it before, you’ll know it’s not really that difficult, especially if you plan ahead. In essence, you’re just fitting very specifically shaped things into their very specifically shaped places. In general, it’s hard to put something in the wrong place, and if you’ve forgotten to plug something in, you’ll know about it pretty quickly. Nevertheless, allow me to provide some step-by-step guidance. 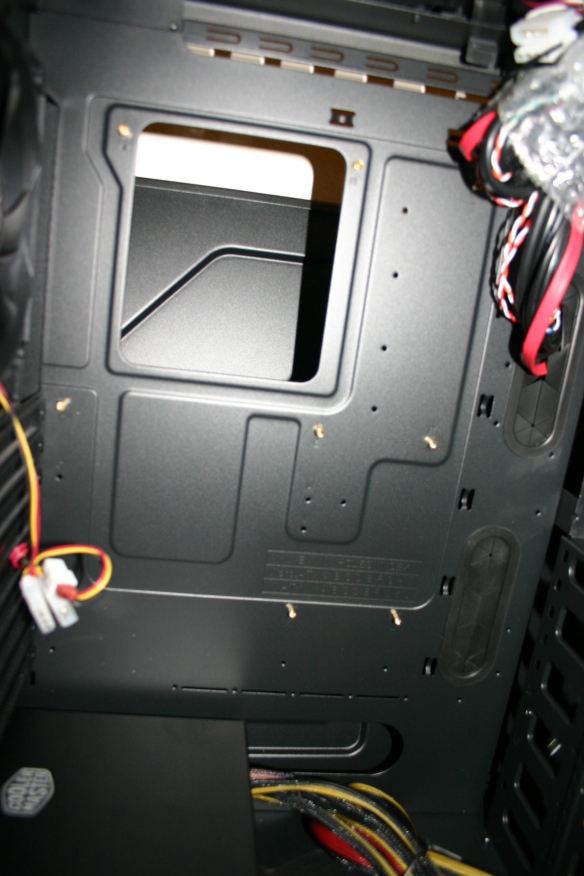 If you have any desire to have a well-organized case (whether for aesthetic or air-flow reasons), it is essential that you take a good look at your new case. In particular, you want to identify areas where you can route cables and the future locations of your hard drives, DVD-drives, and power supply. My suggestion is to remove both sides of the case (not just the side where the component go) and have a look around. In general, the best place to hide cables is behind the opposite side of the case. Thoroughly consider what cables you will have to run (power cables, SATA cables, headers for front inputs) and visualize where they will go. Look at your motherboard layout as well and plan ahead so that you can sleeve and shrinkwrap cables that originate and terminate in similar places.

All builders do not agree on what component to install first, but I always go with the PSU. It’s heaviest thing that you’ll be putting in the case and it the possibility of dropping it on the motherboard always scares me. Most cases mount the PSU on the top, but mine mounts on the bottom. You may notice that your power supply has an intake fan on the top/bottom (not the fan that is on the back). If your case has a vent on the top or bottom of the case near where the PSU will go, I find it best to place this fan against it. This ensures that it will be taking in cool air from outside the case, not sucking hot air from the innards. Place all of the power cables out of the way for now.

3. Installing the Motherboard, CPU, and RAM

Before installing your motherboard, take a look at the holes spaced around the board. These are will it will screw into the case. Well, not the case exactly; the motherboard screws into metal spacers that you will screw directly into the case. The holes are pre-drilled to fit a number of motherboard sizes, so examine the hole layout on your motherboard and screw in the spacers in the proper positions. You can also take this time to pop in the little metal faceplate that comes with the board onto the opening in the back of the case. This faceplate will match the various input/output holes on the back of the mobo.

Before screwing in the motherboard, take a look at your CPU cooler manual. Although I generally prefer installing my CPU once the motherboard is already mounted, some aftermarket coolers like mine require access to the back of the board. If this is the case, you will install the CPU before installing the mobo. Essentially, for CPU installation, you will need to remove the plastic piece guarding the CPU input and then line up your CPU properly. In general, processors have a little arrow in one corner that matches a small arrow on one corner of the input. Line these up and carefully put the processor into place on the board. Use the small spring mechanism to lock the processor in place.

In case your CPU cooler will cover your memory slots, now is a good time to install your RAM as well. Pull back the small clips at the end of each slot and line up the small notch inside with the notch on the memory stick. In most cases, you will have 2-channel memory. This means that if you have 2-sticks of memory and 4 memory slots, put the sticks in alternating slots. Press them firmly in place until the clips at either end click into place. 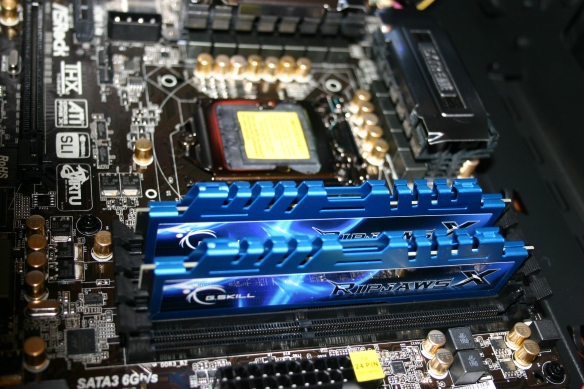 Yeah, I realize I followed my own guide out of order.

If you are using an aftermarket cooler, check out the instruction manual on installing it. Mine, for instance, had a backplate that had to be attached on the back of the motherboard. I then had to apply a small drop of thermal paste.

This is WAY too much thermal paste, by the way. I had to remove and reapply it later.

Next, place the heatsink carefully on top, and screw it into the backplate. Stock coolers often come with a pre-applied thermal patch and simply snap into place on top of the CPU. 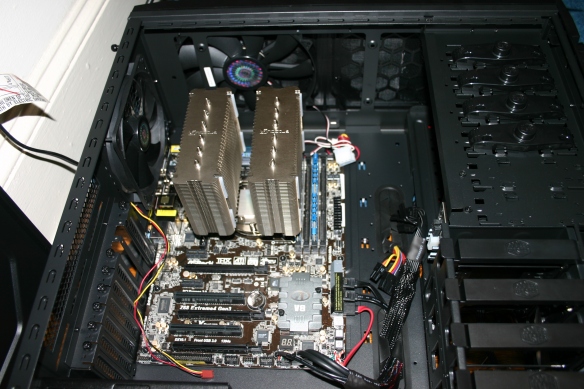 This step is pretty straight forward. Screw these components into their proper places in the case (refer to the case manual) and route the proper power/SATA cables from the PSU/motherboard into them. Optical drives (and other front panel drives) generally go in a spot on the front of the case that has a space-holder covering the slot. These usually pull out or have little tabs that must be pressed to pull them out. Hard drives nearly always go on the front of the case somewhere below the front bay drives.

I put this step here because large graphics cards and sound cards often block access to the necessary areas on the motherboard. Check out your mobo manual to find out where the front-panel headers (small cables that came attached to the case for power, reset, power LED, HD activity LED, front USB, front ESATA, and front audio) plug into the motherboard. They literally get pushed down onto small pins, so be careful when installing them. In addition to being labeled in the manual, the motherboard often has each pins purpose printed on the board itself if you look closely. Please note that if you have a dedicated sound card, the front audio headers may very well plug directly into that card once installed.

Finally, run the cables for your case fans and CPU cooler. The CPU cooler will plug into a 4-pin connector on the board near where the CPU is installed (looks like the front-panel pin connectors). This allows the motherboard to throttle power to the cooler. Several other 3-pin and 4-pin connectors can be found around the motherboard as well for controlling case fans. If you have more pins than headers, connect the fan power cables directly to the cables from the PSU. 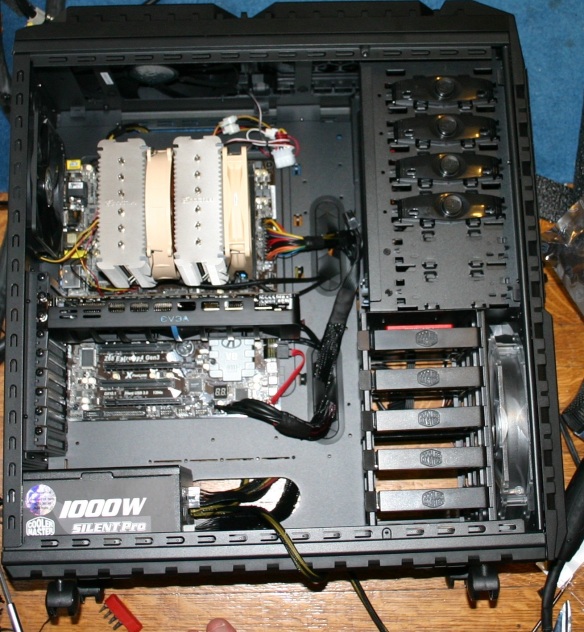 Finally, install your remaining components. In general, you will want to place your GPU in the PCIe slot closest to CPU. This is usually the slot designed with the greatest speed. Before installing PCIe and PCI components, make sure to remove the place-holders at the rear of the case that correspond with where your cards will go. These generally have a screw holding them in place. Unscrew it, remove the little slat, place your card into the mobo, and use the screw to secure it in place.

With many modern video cards, you will have to run dedicated power cables to them. Take a look at the rightmost portion of the card for any power inputs. Find the cable from the PSU with a corresponding number of pins, route it through your case, and plug it into the card.

6. Boot up the machine and install windows

If you did everything correctly and didn’t have any DOA components, the machine should start up and post BIOS. These are the series of messages that you always see when booting a computer. Look for messages that say “Press DEL for BIOS” or something of the sort. Press the corresponding key to load the BIOS. Under one of the tabs you can select boot devices. If you have a Windows disk, set the optical drive as the boot device. If you are installing windows from a USB drive, make sure the drive is inserted, and select it from the list of drives. Save and exit bios, let things boots, and install Windows. Enjoy the new computer!